nce upon a time a girl named Lori spent four wonderful Summers in Saint Germain, Wisconsin with her aunt and grandparents, The Lindbergs.  Lori’s aunt Laurel had learned a new card game called Nertz from a friend and taught it to her mother and niece.  Lori would often team up with Grandma Lindberg, since Laurel was quite adept at Nertz and skilled at exclaiming “Oh boy oh boy oh boy oh!” and other interesting expressions during their “hands” and tournaments.  (That isn’t a requirement, but it might distract your opponents.)  Lori cherishes these magical memories of playing Nertz in the North Woods and taught her sons too (probably the day after they were born).  It’s their very favorite card game, yet is still not so widely known and the rules can vary.  This is how they play Nertz, and you can learn how from them to play with YOUR loved ones.  Hang on to your hats.  Things will get pretty wild!!!

Nertz (known as Racing Demon in the UK) is a fast-paced and fun card game in which players/teams compete for two objectives. These are the Fairy Fly Entertainment Official Nertz Rules. 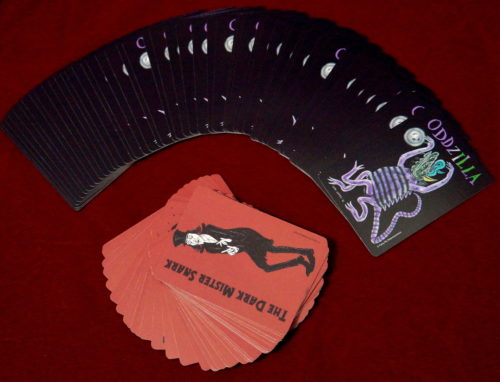 Decks:  Each player or team needs a deck with a distinctly different back design.  Each deck must be thoroughly shuffled.

Teams:  Each team can have 2 players.  Each teammate controls one pile:  Dealer’s Pile or Nertz Pile.  They would both play cards whenever they see a move and work together to spot moves.

Set up for a player/team space is in the following order:

Nertz Pile:  Next deal out 13 cards face down, without looking at them, for your Nertz Pile.  Turn up the top card.

Central Area:  Leave an area of open table space that all players can reach to build King Piles from all of the decks. 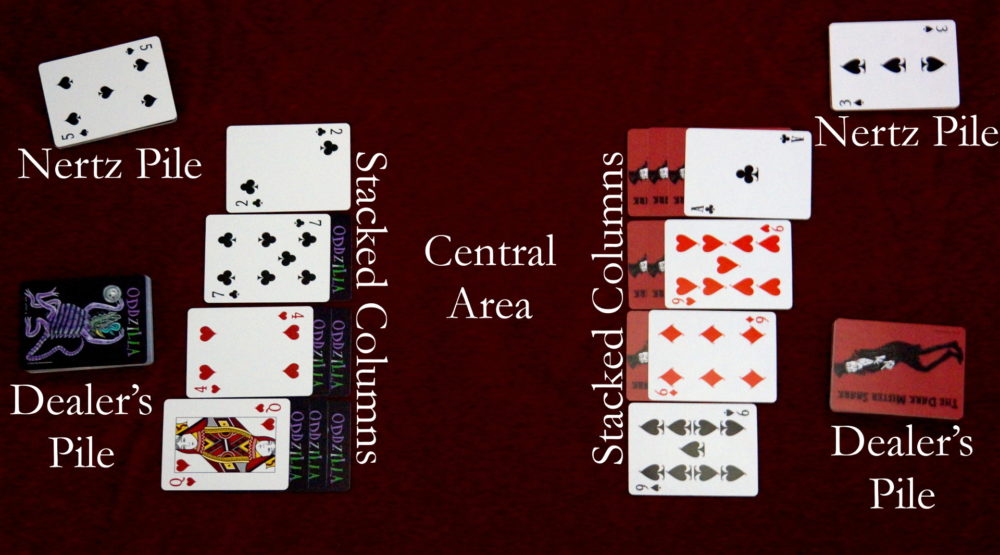 All players/teams start at the same time.  There are no turns.

Each player/team tries to add as many cards to King Piles in the Central Area as they can before someone shouts “Nertz!”, which ends the gameplay.  King Piles start with Aces and follow the same suit in order, up to Kings (no duplicates).  Cards are added from each player/team’s Stacked Columns, Dealer’s Pile, and Nertz Pile.

The Stacked Columns are built in descending order with alternating red/black cards (a sequence) from their own Dealer’s Pile and Nertz Pile.  Cards can only be taken/added from or to the lowest card of the stack.  It is not required, but helps to keep the game flowing, to uncover face-down cards beneath a sequence.  When one is uncovered, it can be turned face up.  A sequence can be moved to an empty column or added on to the last card of another partial sequence (in the proper order and alternating color).  A sequence cannot be split by moving part of it to another sequence (unlike Solitaire).

The Dealer’s Pile cycles three cards at a time face down, which are turned face up onto a temporary discard pile.  Only the top card can be played.  If it is, then the next one is now the top.  When all cards have been placed in the discard pile, it is turned face down and becomes the new Dealer’s Pile.

The Nertz Pile is very important, as it usually determines the winner.  Only the current top card can be played, then the next card is turned face up.  When the pile is empty, that player/team shouts “Nertz!” as soon as possible to halt all gameplay.

Getting Stuck:  Players/teams may get stuck and have no current moves.  They can either wait until cards are placed in the Central Area that open up new moves, or until all the other players/teams are stuck too.  As the same time, everyone can agree to either move the top card on their Nertz or Dealer’s Pile to the bottom of the Pile and play continues.  This can be done whenever everyone is stuck.

The first player/team who calls “Nertz!” receives ten points.  All others must subtract their remaining Nertz Pile cards if any.  King Piles or partial King Piles in the Central Area are gathered and sorted by decks, then counted by each player/team to determine their score along with the Nertz Pile points (plus or minus).  One point per card.  The player/team with the highest points wins Nertz!  Congratulations!