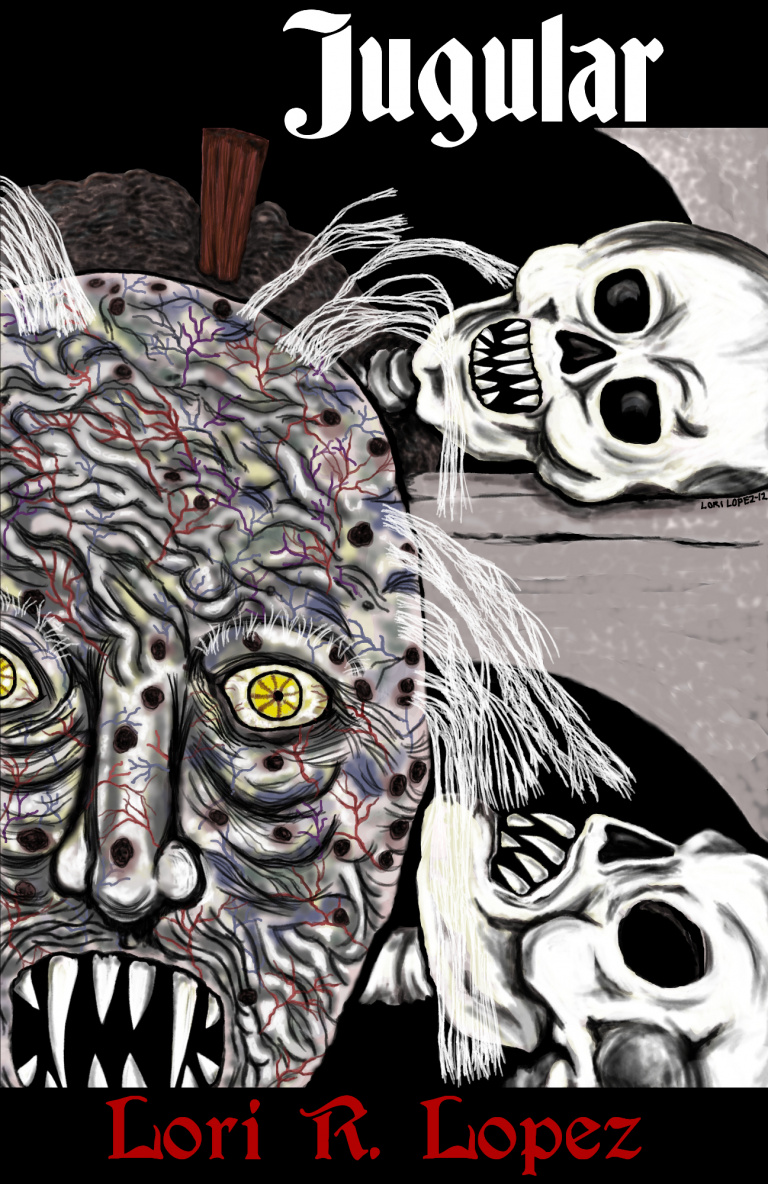 Recommended Age Range:  14 and up

Jugular is a novelette about a woman whose life has never been normal, from childhood to childbirth.  Her mother locked her in a box.  Her son is a serial killer.  Then things take a turn for the worse and she wakes up dead.  Or rather, undead.  From there it goes downhill.  Way down.

What do you do when you meet the mother of all hags and learn she’s your great-great-great-great-great-something-grandmother?  But that isn’t Magda’s biggest problem.  Her life is going through some major “changes”, including that she just woke up in the morgue.  Oh yeah, she’s also a vampire.  Told with creative language, a blending of artistic prose and dark humor, this horror-fantasy novelette is the beginning of a trilogy, yet each of the three parts is a stand-alone story.  Edgy and gruesome, Jugular will take you beyond the grave for an unusual take on a popular mythos.  Although rooted in Romanian history, it is a modern Gothic narrative that breaks the mold, rewriting the vampire legend as a hereditary disease where females are the true vamps, coming into their powers or next blood phase at “The Change Of Life”.  But, like an insect colony, there can be only one queen.

Her teeth even seemed to be going through The Change!  She had nicked her tongue on a cuspid she didn’t remember being so sharp.  She couldn’t quit tracing the contours of her upper canids with the sore tip.  They felt foreign, a bit too prominent.

An unlit region of the chamber extended beyond.  Out of this impenetrable gloom, obscured from the most discerning perception, even Magda’s enhanced vision, a woman spoke in a hushed monotone.  But Magda’s hearing was like an antenna.  “Welcome, my children.  It is time for us to meet.  As it was time for you to die.”

Wings thrummed stale air over rustles and squeaks.  Torchlight orchestrated a ghost ballet, spasmodic as a silent movie, a phantom dance of shadow and firelight down a stone tunnel.  The optical mirage of tessellated elongated partners cavorted at an angle just ahead.  Art could be perceived on the crudest canvas or screen if the mind transcended.

The bully whisked Gramps to the opposite side of the arena for a mischievous game of Catch, tossing the petite squished fellow in the air.

DOWNWARD STABS PIERCED HER a thousandfold.  That was how it generally went.  Encircled by an umbral tide of blackness denser than a total eclipse.  Though her eyesight was keen, improved in recent months, it happened too swift to make out the features or distinguish traits and dimensions.  Whoever was trying to kill her remained anonymous.

She heard whispers.  Pesky and persistent.  As if vicious people were gossipping about her.  And then there was the smell, a cloying scent that made her belly lurch.  She couldn’t get it out of her head.  Along with the steady palpitation that accompanied her thoughts.  Sometimes this became maddening, a wild rhythm of abundant beats marching to discordant drummers.  Other times there was a single cadence building an urge within — the compulsion to obey a powerful impetus.

She tossed erratically, her sleep deprived by depraved sensations.  Mysterious furtive scritchings on the walls of her fear, clawing to get in.  An underlying significance pervaded, groping at the fringes of her semiconscious state.  She couldn’t quite grasp the meaning, but it left a foul taste in her mouth.  Or jerked her awake, coughing and choking, Acid Reflux scalding her esophagus.

No no no.  She yearned to go back to a placidly dull routine, struggled against the fetters of what felt inevitable.  It was like denying what you knew in the back of your mind to bear a kernel of truth.  You could shake your head and obstinately rail in contradiction, yet that grain endured.

““Jugular” pulls the reader in immediately, then treats them to a richly expressed, unique story of supernatural experiences.  Magda is a heartbroken widow with a vicious, abusive son.  Although her son has proven to be a disappointment and source of unhappiness, Magda feels a mother’s love and, inevitably, gives her life trying to protect her strange son.

When Magda awakens in a morgue, she is thrust into a journey of fear, uncertainty and, perhaps, fate.  She ends up under the power of an old hag vampire who wants to eliminate Magda and the handsome detective who had been searching for Magda after she left the morgue.

Lopez really knows how to write battles, and she knows how to describe her bad guys so that you will be checking under your bed for a week!  Her use of language is quite unique, and her storytelling skills are superb.  I can see this book having a sequel!”

“Magda had struggled for peace most of her life.  Only with her beloved husband Felix did she find happiness, someone who truly loved her as she was.  That happiness was taken from her in apparent suicide, for which she blamed herself.  Since that day, she has merely existed, a pawn at the hands of her abusive son.  Life, such as it is, continues on… until the day it ends.  Sort of.

Once again Lori R. Lopez crafts a fine story and pulls you into it.  As the title suggests, it is a tale of vampires, but with a twist.  Forget your preconceived notions of how vampires are created.  Forget other stories of vampire hunters.  If you’ve read anything by Ms. Lopez in the past, you’ll know she has her own way of looking at things, and it’s always going to be outside the box!  If you haven’t yet discovered her stories, you’re in for a treat.  Jugular is a novelette, short enough for a quick afternoon read, but long enough to give you all of the detail the story demands, pictures painted by Lori’s unique way with words, and a satisfying conclusion to a finely-wrought tale.”

“Lori Lopez is like reading poetry only with a horror kick! She is no fast read author, this is a lady you savour and enjoy the flow of the story, you need the time to digest the constant flurry of exotic words and images that she sends your way. The visual imagery that Ms Lopez conjures up with her words has an exquisiteness all her own.

In this novella she treats us to the genre of Vampire! and musters up a legend unique to her!
A woman is struggling with the change in life, it seems, this is not helped by her unexplained [husband’s] strange suicide and the immense guilt she feels for her wayward son. One night she is killed, then the true story begins! Plunged into a dark world of dwarves, spooky houses, blood drinking and matriarchal vampire rules Ms Lopez weaves us towards a climatic fight scene to the death… but whose! A brilliant ending, as always.”

“Magda’s mid-life crisis is far more complicated than most.  Her husband has long been deceased under the most surreal of circumstances, her only son is a monster, and she seems to be . . . getting younger?  Her experience of the “change of life” is proving far different than she had expected.

The story opens beautifully, with exquisite prose and a unique premise that will draw the reader in from page one.  About halfway through, it falls into a few clichés that are obviously intentional, but not quite fitting with the preceding seriousness of tone.  Still, anyone familiar with Lopez’s work will appreciate the lighthearted feel that prevails throughout most the rest of the work.  JUGULAR is a fun, quirky story that turns the vampire tale on its head in a way only Lopez can.  I give this work 4.5 stars.”

“Excellent!  This is a great story which reminds me of my favourite desert; rich, decadent and full of so many layers that you get something different in every single bite.  There are nuances here that will thrill any vampire history buff.  And I love the sacrosanct description of Magda’s change.

Jugular tells the story of Magda and how vampires came to be.  Forget what you have been told and forget the popular notions.  Magda has lost her husband to suicide and is left to deal with her psychopathic son, however, all that changes when police show up at her door.  Everything she thought she knew has disintegrated as she rips off the toe tag in the morgue.  And then the journey begins.”

“In this story, once again Lori Lopez, gives you a world that you can’t help but be pulled into.  The characters in this story are so passionate and Magda, the main character is a strong willed woman who is able to face more than she should have ever had too.  Her husband killed himself and left her alone in the world with a son who was more monster than human.  Magda has to find out about her life and her family in the worst of ways and just as happiness in within reach, well I don’t want to be the spoiler but this is a wonderful story that everyone will enjoy.”

“Just finished Lori R. Lopez’s story Jugular.  This is not your usual vampire story.  The vampires neither glitter, glow, nor have any redeeming behaviors — well except for Magda of course.  This story is another good short read with a lot of twists and turns that keep the reader interested and engaged.  According to this story Vampirism is not a male ‘disease’ but carried through the female bloodlines — an interesting concept by itself but proves to be rather unsettling for our heroine.” 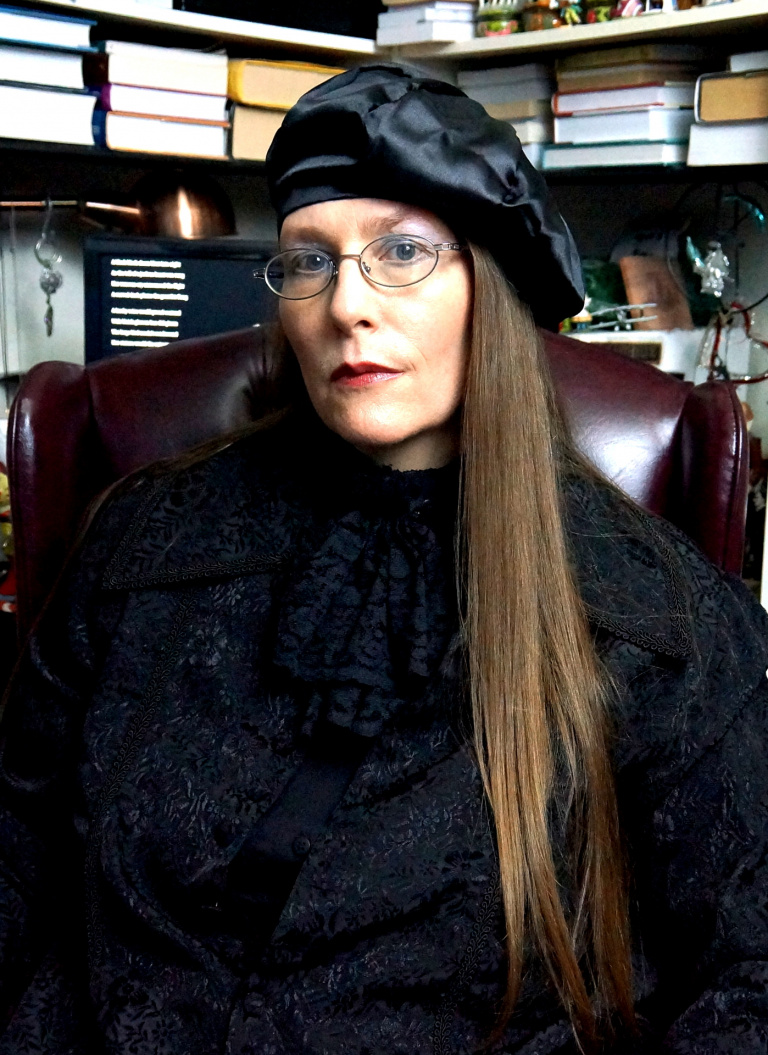