Shivering at my desk from cold that cannot be warmed by four sweaters, one of which is pretty thick, I must compose a series of words that say a great deal without saying too much and without being misread because not saying anything could make my head explode. I am a writer who writes, above all, of the sheer lunacy and terrors in the world — as well as the beasties that lurk at the very edges of our gazes, along the unbounded extremities of the imagination. It is the month of hearts for some. Yet a horror author, and a victim of horrors, can take such matters “to heart” and view them in a different light. Without warmth. With a blood-chilled perspective and a sharp-bladed wit that envisions the hazards and crimes committed in the name of Love upon the minefield of Life, where walking on your tiptoes doesn’t do much good.

I have never enjoyed what could be termed a traditionally happy Valentine’s Day, so you’ll have to pardon me now if I choose to take a less cheerful slant on this tradition of exchanging hearts. Too many unkind things are done “out of love”. There are numerous examples of supposedly caring persons who harm children, women, men, and animals. What’s with all the hurting?

I wish that on Valentine’s Day we could truly have a day of love where nobody gets hurt. Wouldn’t that be grand? Wouldn’t it be nice if everyone just kind of woke up and decided to be good to everybody else? As humans we are capable. It is a conscious choice.

The cold burns my skin. Cloaked in a blanket, I continue to type as a figurative frost surrounds me like a tomb-yard brume. It’s February outside. In here it is just another day on the rollercoaster track of existence. Our ups and downs define us when we acknowledge them. Ignored or lived without reflection, they pass then fade and are forgot. Sometimes that’s best. And sometimes it’s not. Sometimes that which we survive needs to define us, in part. Too often it is our mistakes and failures that determine how we are perceived and even, to a degree, our Fate.

Sometimes we have to write, or dance, or wail. Sometimes it is a memory that assails, reaching out of the past, clawing like a handful of bones from the grave. Maybe it’s an incident, or a chain of them. If you are cold like me, you understand. The only way to thaw is this: to release that which wounds, that knife through the heart.

It isn’t all black and white, or a single shade of gray. Sometimes it’s the intricacies we miss. Those little details added up or taken alone that can make a world of difference in what we thought was said or done. And then as time moves forward and confusion leads to silence, the moment can be past. Slipped through our fingers. Will it ever come again?

It might be a set of circumstances. A string of dismal luck. There could be other factors, other parties, an absence of trust or honesty, an array of causes and effects . . . all leading to the same conclusion. A bloody heart on Valentine’s.

Intricacies are like slivers of broken crystal, as fine as threads of fiberglass. They can slice you to ribbons if you don’t see them first. They can penetrate the lungs, the heart, the soul. They may blind you or invade your brain, carve it into confetti-sized shreds. And then the monsters come to gobble what remains, devouring the tattered gushing hearts that lie exposed.

Do not be surprised if they come for you.

Love without understanding will lead to misunderstanding. Guard well your feelings, your affections. And heed those intricacies. If you can.

There are words we regret

That come out upset

Words that fail to speak our mind

They can hang in the air

And continue to blare

Putting us in a terrible bind

Can ribbon our words to mince

Flaying what we don’t mean

Though the axenings make her wince

For the interest of Science

And lack of reliance

It’s better to hold your tongue

Unless you are certain

It won’t be your curtain

To express the excessive unwrung

I thought I had something

But then I had nothing

As quickly it came and went

While perceptions are fraudulent

And I lost what was found

But I really can’t tell you why

Without seeing eye to eye

There are lessons to learn

In the wink of a turn

As reality changes to dust

And we’re left in a daze

Wondering was it a craze?

And if ever we can again trust

You’ll be sorry you said it

For the wording will not be clean

We must polish and buff

To avoid saying what we don’t mean

Even with idle chatter

For the feelings can get hurt

A tone can seem too curt

What you utter in candor

May lead thoughts to meander

Conclusions are drawn in a leap

Or it’s better to not make a peep!

A blackish knight by lantern light

With soggen gait did he frustrate

The trackers after his brusque feet

Alone he trekked and did reflect

On how he came to be so cruel

The lives he claimed who were unnamed

Would deem him nothing less a ghoul

He’d swiped the heads of all his deads

But for the sake of victory

An empty taunt, a heart to vaunt

Their lives were squandered for his glee

The kingdom next to leave bevexed

Would host a tournament renowned

Without his steed he was in need

So snatched a farm horse that he found

This blackest soul would play the role

Of suitor to Princess Portend

Whose honor knights would joust for rights

To woo and troth at tourney’s end

But to the court’s immense surprise

By teardrops rolling from his eyes

“I weep for love’s elusive dove

For never knowing such a treat

Dear Lady, with the face so sweet!”

Spoke he these words, gone still the birds

And every ear was raptly tuned

For there was more that did outpour

A song of love his lips they crooned

“My Lady fair, if you could care

For such a wretched blasphemy

The beast subdued inside of me!”

The princess learned if he was spurned

That all would suffer his defeat

Till not a single breast should beat!”

The crown announced as his decree

“You shall contend for my Portend —

But fair is how the match shall be!”

The rules were set that must be met

Each man a valentine should bring

The strongest heart would stand apart

And give the lady thus his ring

That day a dark knight rode away

To contemplate what he could offer

Then back he came with his best game

The largest ruby from his coffer

“A jewel is cold and cannot hold

The endless love you promised, sir!

This will not do, be off with you!”

The princess ordered to the cur

Yet he did not the lady stab

His own chest cleaved, the core was heaved

“There is your valentine!” his jab

“I give my heart pierced by your dart —

I’ve nothing more than that to give!

Accept it and I’ll let you live.”

His bleeding gist the princess kissed

That heartless knight she promptly wed

The realm would thrive with all alive

Except her spouse, who was quite dead.

Here is my heart, do not forsake it

Handle with care lest you should break it

Those who did not no longer breathe

For they were shot who made me seethe

The sawed-off barrel of my loaded pen

Delivers vengeance to all such men

The liars, betrayers, abusers and pigs

The arrow that flew from Cupid’s bow

Straight to the heart as legends go

Has hurt and wounded and slain my love

There’s nothing left to rise above

I thought I had finally found love true

But Cupid maimed me through and through

That little vermin is going to pay

For the heartache and anguish that won’t go away

I’m setting a trap for the chubby rat

He’s going to be sorry, I promise you that!

I plan to bake him in some tarts

And then I’ll have fun with his poison darts.

One morning shrouded by gray mist

Five men were marched into the gloom . . .

Was the fourteenth day in the second month

That they were slated to meet their doom

A monstrous man by name of Drood

Would end their lives to feed his own

That afternoon he claimed five more

And ripped the pumps out with bare hands

Then feasted, dripping from their gore

If he could not know love himself

Then he would steal from those who could

His badness stemmed from total madness

The villain had no drop of good

That evening he commenced to dine

When in the group he should behold

A man who never gave his heart

Whose feelings were but cold

This empty vessel caused a void

That spread throughout the length of Drood

With little substance to begin

It nullified his mood

The appetite for love was gone

His craving had subsided

He wandered off into the woods

Where he has since abided. 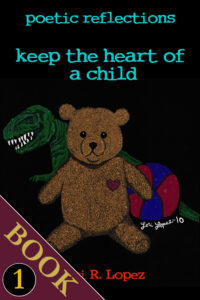 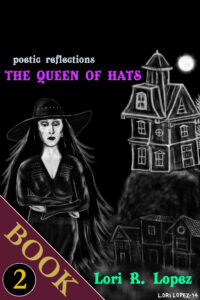 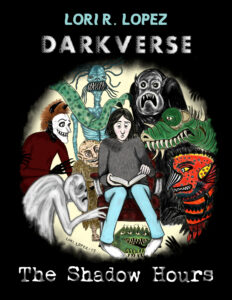 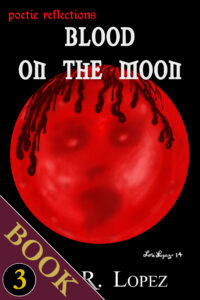